What a day! Report below from Brian  Ó Cléirigh, Photos from Kieran Kelly

Seventy happy laughing people turned out for the occasion, many of them having already spent the morning on Tara Hill with walk-leader Martin Murphy, doing that stage of the Walking Festival.

Then after some words of welcome Patrick Power led the contingent off across Tobarbeg Lane to take the old Wexford-Dubin Road for the Lower Street of Oulart.

John and Eileen Dempsey and Jim Mythen waited on their arrival. All was in readiness to lash out the tea and to give the signal to Joe and Martin Leacy of Crosshue who were ‘following’ the mill and pitcher to get the threshing under way. You can see below the patient Jimmy Adams aloft waiting to feed the drum.

The walkers refreshed themselves with tea and confectioneries while enjoying the threshing and all are grateful to all those volunteers who, like the men of ’98, came with their pitchforks to make it all happen. It was a grand old sight that warmed the hearts of many and prompted many questions from those completely unfamiliar with it. Then it was on the Oulart Hill.

Emerging from Coillte ’98, the Commemorative Forest on the Hill the walkers made their way up to Tulach a’ tSolais where the National Pike Association gave them a beautiful and deeply appreciated guard of honour on their entry to the great monument to 1798 in the context of the European Enlightenment.

After the formalities there, it was out to the banqueting tables all ready for Breda Redmond’s marvellous ’98 Stew carefully readied and served by Jimmy and Lucy Bolger. It was hectic work there for quite a while, as it had been with Eileen down in Lower Street.

Then as the lovely strains of old familiar tunes floated on the evening air the sun began to approach the passage of the monument. As it did, a cloud intervened, threatening to cover the sunset, but to the joy of all it moved away again and out came the sun, brilliant and resplendent, shining straight down along the passage – it was just after 7 p.m.

Everybody managed to see the Equinox Sun go down and it seemed that everyone had become a photographer as phones popped up in every hand to catch the scene.

Then after some minutes the Sun was gone and it began to feel chilly and so it was back down to Oulart’s ancient Lower Street to the Bygone Days House of Stories for the ceol agus craic which lasted till 1.30 am. The best musicians in the district as well as some welcome visiting musicians from South Wexford had answered the call and Fear a’ Tí, John Dempsey kept the music and storytelling nicely balanced throughout the evening.

It had been a wonderful day. Joe Harney of the Ferns Pikemen summed it up very succintly when he said that ‘It was a proof, once again of what we can achieve in any aspect of life by just using our own resources and all working together like this.”

“Let us discard the approach which says that ‘good enough will do’ and replace it with the motto – ‘only the best is good enough.'”

Our appreciation extends very much to the star players of this weekend – the walkers themselves. A great group of good-humoured people out for a day’s healthy exercise who showed their appreciation to the organisers on all occasions.

You know, there wasn’t one scrap of paper on the sod of Oulart Hill the following morning! Bravo to the walkers and bravo Wexford Walking Trails and their teams at Oulart, Gorey, Tara Hill and Kilanerin who prepared the venues for this years Festival. 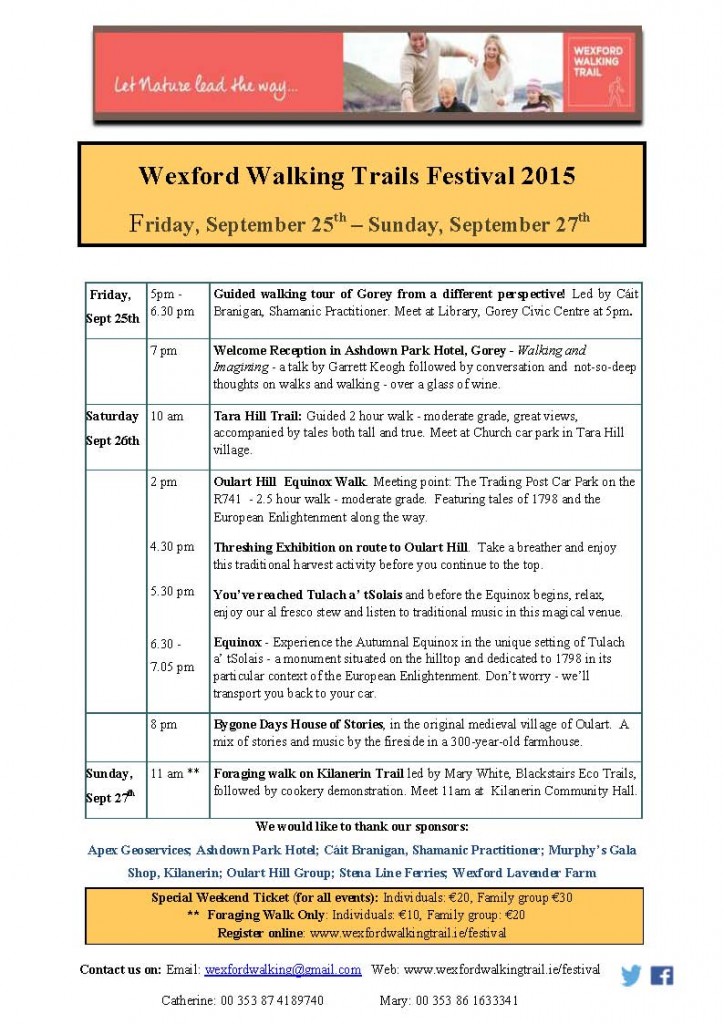