Tulach a’ tSolais was opened in 1999 with substantial Government financial backing it is in the words of TK Whitaker ‘dedicated to 1798 in it’s particular context of the European Enlightenment’. It is the largest and perhaps the most nuanced monument in the world to 1798. Scott Tallon Walker Architects where responsible for the construction with Ronald Tallon and Michael Warren being chiefly responsible for the “revolutionary design”. Background on the project by History Ireland 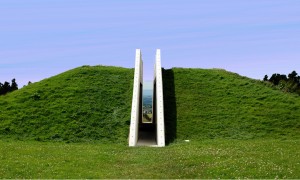 “Deep in the pastoral landscape of Ireland’s County Wexford, a shaft of concrete cleaves through a green hill like the entrance to some futuristic burial mound.” (c) Robin

“The construction of a tulach or burial mound, as a place of connection between the world of the living and the ‘other world’ was common in ancient Ireland. The United Irishmen’s uprising of 1798, fuelled by the revolutionary example of the United States and France, took place at Oulart Hill. Victory led to the establishment of the fledgling Wexford Republic; defeat at Vinegar Hill three weeks later, on the summer solstice, June 21st, marked its eclipse. Tulach a’ tSolais, was built to commemorate the bicentenary of this rebellion and is the product of dynamic collaboration between the sculpture Micheal Warren and Dr. Ronald Tallon.”

“Upon arrival, there are no carved names, no flames, no pools of water. This is a much older kind of memorial. Warren recalls Tallon saying, “What we want, Michael, is to go over a broken stone wall and be there. The approach should be like the surprise of finding a fairy ring.”Tallon chose white concrete for its “pallor of death”, illuminated by “the light of resurrection.” “We wanted a basic monolithic material of strength and nobility,” says Tallon, “with which to create a modern Stonehenge.”

Tallon calls Warren’s two sculptures – horizontal curving tablets of 200-year-old Irish oak that make a shrine of the interior – “upturned hands, offering hope for the future.” Warren likens them to the cremation bowls found in Newgrange.”

On April 10th, 2014 a significant event took place on Oulart Hill with the planting of groups of nine trees of nine ancient Irish appletree varieties to form what must surely be a uniquely authentic celebration by a small rural communtiy of its own ancient local placename. The local name Oulart is derived from the Irish word Abhallghort meaning Orchard and it is here celebrated with the first Abhallann in the land.  Indeed the word abhallann itself is a first  as it is a new word for the Irish language – coined for the occasion- meaning apple arboretum. [Pronounced ‘owlin’ – like surname Howlin without the h]. The planting of the new Abhallann was marked with the erection of a dedicated stone marker.

A fitting coincidence was the arrival of the 3rd Battalion from Steevens Barracks, Kilkenny on a tour of the 1798 sites in the area. Many of the people present were direct descendants of those that took to the hill on that historic day of 27th of May, 1798. 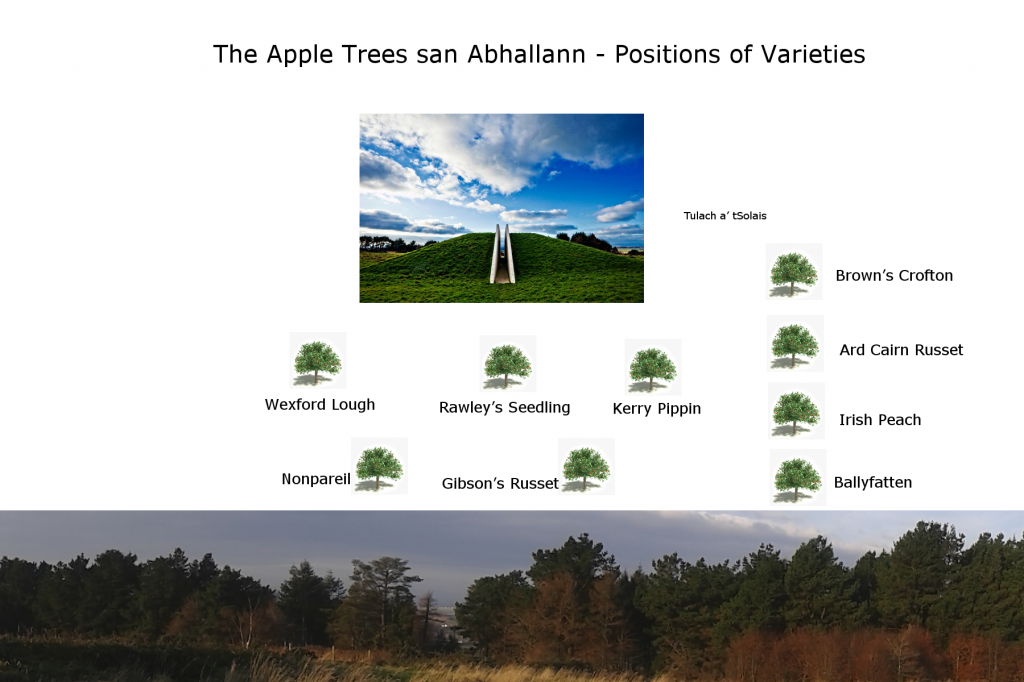 For some background on the woodland on Oulart Hill, the following is a piece taken from Coillte’s website.

In January 2001, Coillte was approached by Brian O’ Cleirigh, Chairman of Tulach a’ tSolais, to see if we would be involved in the formation of a Memorial Park on Oulart Hill. Coillte were very interested and so a meeting was convened between Coillte Management, Brian O’Cleirigh and Minister Hugh Byrne T.D. to see what arrangements could be made to bring this project to fruition.

The outcome was that Coillte agreed to design a woodland park which would represent the aspirations of the local historical group Oulart Hill Co-op.

Coillte has owned a twelve hectare conifer forest on Oulart Hill since 1952 and the new project – to be known as Coillte ’98 was designed to bring colour and variety to the hill and significantly enhance its commemorative and amenity status.

In this unique memorial to 1798, the actual location of the first battle of the 1798 Uprising, a forest of broadleaf trees replaced the conifers. The new forest will focus on the nation’s children, especially those born in 1998, and will include an acknowledgement of the roles of Australia, Canada, France and the United States in 1798.

One section of forest each is dedicated to the children of Wexford, Wicklow, Dublin, Carlow, Kildare and Meath, and a section each for those of the rest of Leinster, for Munster, Connacht and Ulster.

One special block is dedicated to the children of the host parish of Oulart itself, particularly those born in 1998. The name Oulart, which comes from the Irish word ‘abhallghort’ meaning orchard, is reflected in a border of crab-apple which grows wild on the hill. Each of the woods, which vary in size from 0.2ha up to 1.2ha, are planted with different species of broadleaves e.g. oak, beech, maple, ash, wild cherry and, eucalyptus to especially represent Australia.

It was decided at the outset that the trees will not equate numerically with the babies born in the individual counties. There were for instance 1613 births to County Wexford domiciled mothers in 1998, but it was decided to plant a greater number of trees than this rather than a specific tree for each child. Thus each block will notionally reflect both each and every birth in the area to which it relates. So, in time to come, any young person may go there and know that he or she is represented in the wood of his or her place of birth.

In order to present the design of the woods in a way that would be both visually attractive and informative, a sign was commissioned from Coillte’s Sawmill in Dundrum, Co. Tipperary.

In keeping with all the other elements on Oulart Hill, Coillte ’98 reflects a comprehensive view of 1798 which looks to the future with a confidence rooted in the deeds of our forbears. When fully finished, this project will have proper paths, signage, and picnic places and with its unique Fr. Murphy’s Well (where Fr. Murphy of Boolavogue is reputed to have washed his wounds after the battle).”