Our group is a broad based community body established in Oulart in March 2012 to develop walks for the health and amenity in the local area and wider region. See below for a more detailed description and vision for the project. 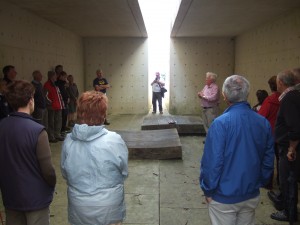 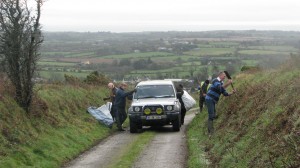 The group planting trees on the trail. 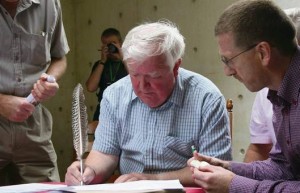 Stone markers for the trail where engraved by local stone cutter Páraic Doyle of Bunclody. The type face is supplied by Vincent Morley and his small irish company called Gaelchló, http://www.gaelchlo.com/. Simon Rath, Carrigeen, Ferns kindly donated the stones from his quarry and they where delivered to Bunclody by Jimmy Whelan, Askasilla, Blackwater. 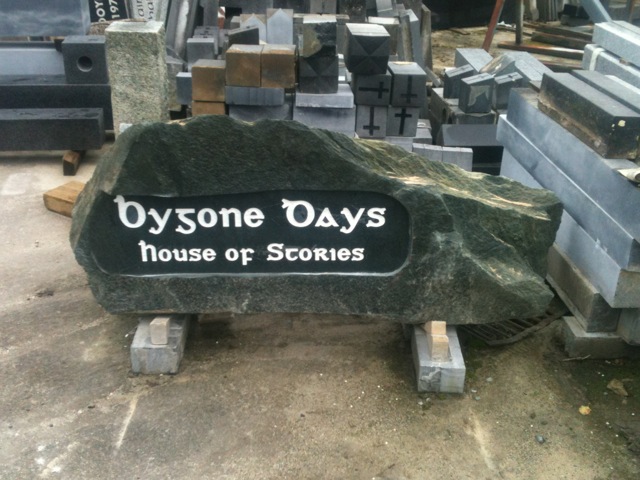 Oulart Hill Development Group, is a voluntary grouping comprising volunteers from Oulart and the neighbouring parishes. Its members are linked into other organisations in the neighbourhood such as Oulart-The Ballagh GAA Club, the ICA, the Bygone Days House of Stories and the Over The Water Vintage Club which joins with the Group in an annual Heritage-Week Walk from the Trading Post Camping park in The Unyoke to Oulart Hill.

The Group is working to develope a broad series of walks in their locality which will benefit the health of local communities and provide walking tourism infrastructure that they believe will in time enhance economic development of the wider region. Already, despite only being set up in 2012, the group hopes to complete the first phase of it’s overall plan this year, 2013. This will comprise three walking trails centred on Oulart The ’98 Village which will offer the walker lovely walks in a natural environment laden with 1798 historical sites some twenty of which will be marked by commemorative stones the gift of Simon Rath of Carraigín and carved by Páraic Doyle of Bun Clóidí.

Cosán na Glóire [Path of Glory]: The first and shortest walk, runs across the level summit from the car-park to Tulach a’ tSolais – the biggest monument in the world to 1798 and the most nuanced. It was described by Dr. T K Whitaker as ‘a monument to 1798 in its particular context of the 1798 Rising’. Cosán na Glóire provides a lovely relaxing level walk for families with small children and for older people who wish to take the air out among the vast panoramas of county Wexford which surround the hill on all sides. 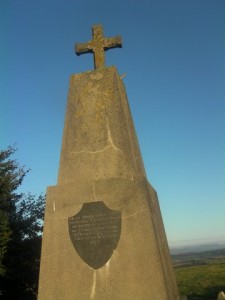 The Jean Kennedy Smith Walk: a 4 km. loop from Oulart The ’98 Village up Oulart Hill and across via Cosán an Glóire and Tulach a’ tSolais, through Coillte ’98 and returning via Bessy Breen’s Lane, Drover’s Lane, the Tree of Liberty, Cuanach’s House, the North Cork Lane and the 1898 Monument to end at the GAA Grounds opposite the Parish Church and ’98 Chapel.

Mrs Kennedy Smith, then the United States Ambassdor to Ireland, was very taken with the significance of Tulach a’ tSolais and visited the village a second time to turn the first sod on the site in May 1998. This is expected to be a very popular walk with locals.

The Unyoke Walk:  This is an 11 km. linear walk from Oulart Hill down into the mediaeval village of Lower Oulart on the source of the Aughinall River which flows under the bridge of beautiful Blackwater village. Passing the Bygone Days House of Stories it turns abruptly to heave up and over Sliabh na Gréine via three kilometres of the ancient untarred Wexford-Dublin Coach road. Running along through Aughmore, passing the Fairy Lane and Ballinamonabeg it pauses at the monument at the historic 1798 gateway of Edward Fitzgerald of Newpark and resumes to turn around via Tobarbeg Lane to the Trading Post Camper Park in the Unyoke.

If all goes well it is hoped to make further progress in the medium term. In cooperation with groups in other parishes and with the National 1798 Centre in Enniscorthy and The Fr. Murphy Centre in Boolavogue it is hoped to provide a veritable network of walking trails which will introduce the growing and health-conscious walking industry to the entire region.